Home BC Heads Up (was: Head Down)

Heads Up (was: Head Down)

After my bombardment of posts in June and July, before I left for vacation, I have been very silent out here. Almost two months now. Heads up!

But it might even take somewhat longer as I have been “head down”. For those who are somehow connected to me on the social media this possibly has been a recognizable image of me: “Taliban Luc” as someone called it. 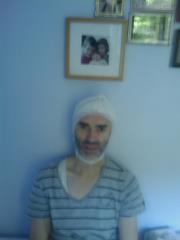 The day after I somehow had managed to drop the back of my head on the corner of the sideboard in our French house. Wounded and in shock, an ambulance brought me to the nearest by hospital (in St. Affrique, 40 km away), where they stitched, or rather cramped, and bandaged me. My dear wife and two youngest children, shocked as they were, followed somewhat later as they were not allowed to join me on the ambulance. And (still) no recollection at all of all that happened in the approx. 9 hours the followed my ‘crash’. OK, there are some static memories (“pictures”) of that period like nurses – my age and red dyed hair [;)] – and infusion tubes

Around noon we were back in our house. Laying down on our sofa memories are back again, feeling like I woke up from a dream with confusing images. Thankful I stayed on the sofa the rest of the week. Thankful for the unconditional love of my wife and children, thankful it was only a concussion that I had to recover from – and 6 weeks later am still recovering from -, thankful for the very nice weather we were experiencing; thankful for the fact that this happened after we had visited Xavi and Mireia in Banyoles, Catalonia, and I did win Ticket-to-Ride. [8-|] And of course thankful that we weren’t hit by the wildfires around Fiqueras – we were very close to that – and could drive “home”.

So now I am getting back on the trail again. Not yet writing, but hopefully around in Antwerp at the end of the month.

And sure this looks much better, doesn’t it?